Sue Reynolds explores the landscape of social media and digital marketing in a world where customers are in charge of your messaging.

According to the commercial director of Facebook in the U.K., soon we will no longer need our own websites. His rationale? Facebook will be so integrated into the web that businesses, even major companies with a huge web presence, will abandon their own website in favor of the social.

Yes, Facebook’s welcome tabs, soon to be developed with iFrames, do have the potential to function as mini websites. Functions like e-commerce, forms, surveys and polls are some of the many features available directly on the tabs, allowing for a good amount of interaction right on the page. Include in that the multitude of third party applications built on top of Facebook’s interface that allow programmers to create custom programs, and it’s true, Facebook can function much like a website. Their hope, and their plan, is to eventually create a platform that will keep users contained within its walls, complete with branded stores where users can purchase goods and where content is organized around our social connections.

We’re not there yet, and I’m not convinced we will get there any time soon.

I don’t know about you, but I’m uncomfortable putting my business in the hands of a third party, one over which I have no control. Haines states himself that “There have been eight iterations of the [main] Facebook design over the last few years… [and] it will look different in a year”  (Techradar.com). So, in a year your business page will change, and you have no idea how. Additionally, anyone using Facebook for awhile has experienced the “where’s my stuff” reaction when logging in to find the page rearranged and functions changed. I’ve had people contact me in genuine distress, not able to find the photos, status updates or pages they depend on for keeping in touch with friends and brands. Do you want your website subject to the whims of Facebook’s developers?

To top it off, recently I navigated over to my own Facebook page to post an update, and encountered this: 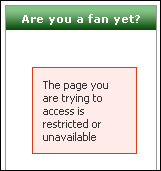 Yikes. So this is the state of Facebook right now. Frequent, often misunderstood changes, occasional pages down due to site maintenance or updates, and frustrated users ready to throw up their hands. Yes, Facebook has some awesome features, and they no doubt will rule the Internet in the not too distant future, but will they really be a substitute for corporate and small business websites?

Are you ready to give up your business website?

More of my musings